When we got to Baltra, there was no OAT bus due to some miscommunication. Bus finally did arrive to drive us to other end of island to catch barge to Santa Cruz. On way, we stopped to see a large sinkhole; started to rain. When we took the barge we could see the remains of the Cachalote which recently sank; this was the boat Steven was on when he was in the Galapagos in the 1980’s. 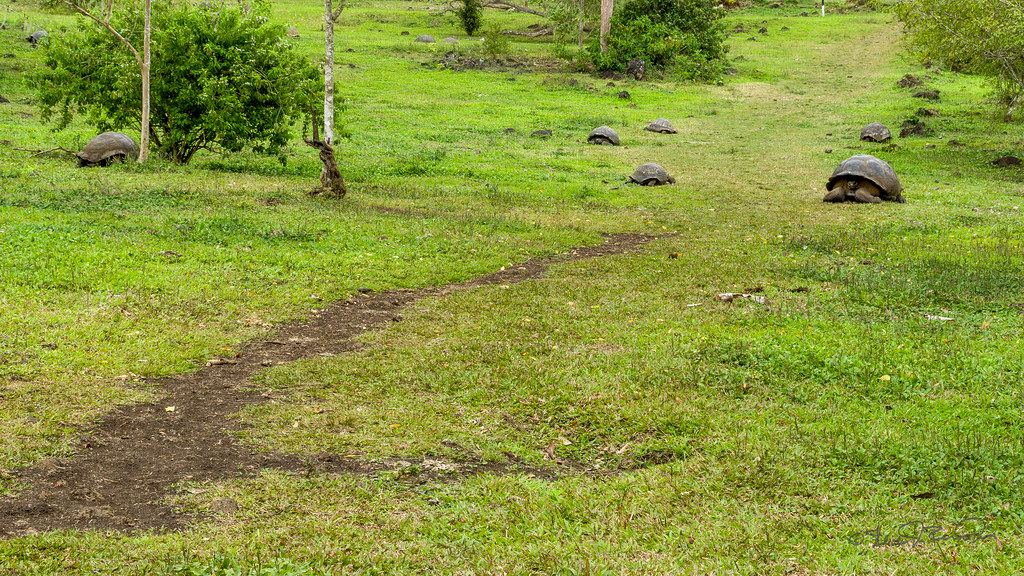 At Santa Cruz Island, we made another stop for lunch at a tortoise sanctuary—La Rancho El Manzanillo. Walked through the area where you had to watch where you stepped. Those large boulders were tortoises! Great to see them in their natural environment, wallowing in the mud. Also stopped at a spot on the property to see how they make sugar cane moonshine with a small outdoor still. They convert the sugar cane the old fashioned way (the 3 ladies tried to move the large cane press together and it was very difficult. Then they used a donkey!). 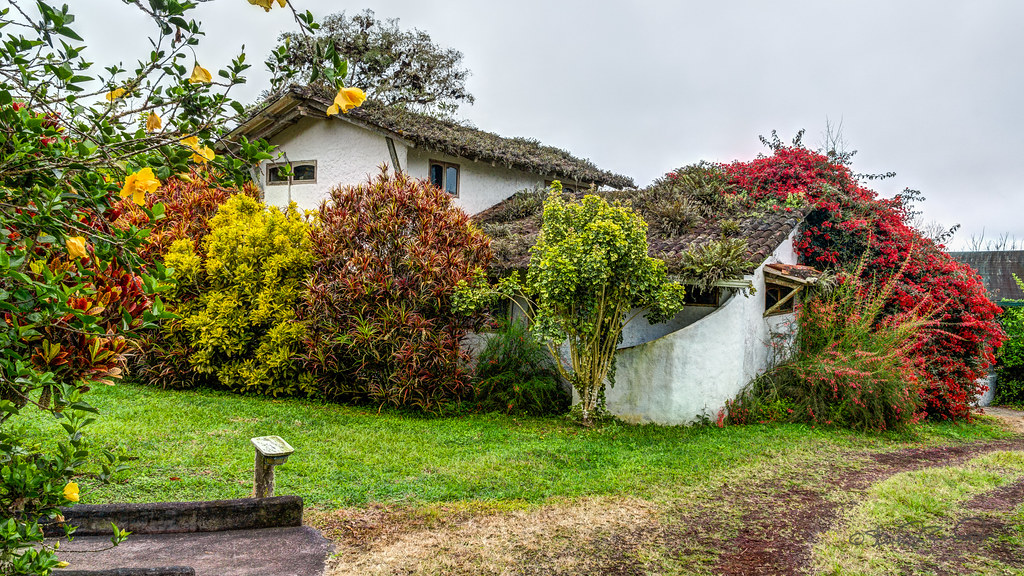 Checked into our hotel (eco-lodge) in the middle of no-where. We again had the best room. Near the eating area but upstairs in the back; complete with giant spiders!!! We were the only group there. Also, owners of the lodge are also owners of the Cachalote who were in Victoria, BC trying to buy another boat! Bus took us all to town (Puerto Ayora, the largest town in the Galapagos) where we walked through the fish market (Boats just in). Lots of pelicans; definitely a beach town; got a few T-shirts. Bus driver left for the evening so Fernando arranged for taxis to take us back to the lodge for dinner. .After breakfast, we went to the Charles Darwin Research Station for a history of the wildlife on the islands. They had the largest tortoise (Lonesome George) stuffed and in a environmental chamber. Also saw Super Diego (live) who fathered numerous (over 800?) tortoise.

Boarded the San Jose which will be our boat for the islands. Had lunch on board. We have the upper deck front room (#8 with the ‘matrimonial’ bed!). Decided to leave the room in upper deck and hope that my seasickness patch and wrist bands would help which they did. I cut the patch in half and since it is good for 3 days, I only needed the one patch. Used the wrist bands and was prepared with ginger tea and candies but didn’t need them. In spite of a very rough first night, I did not get seasick at all. 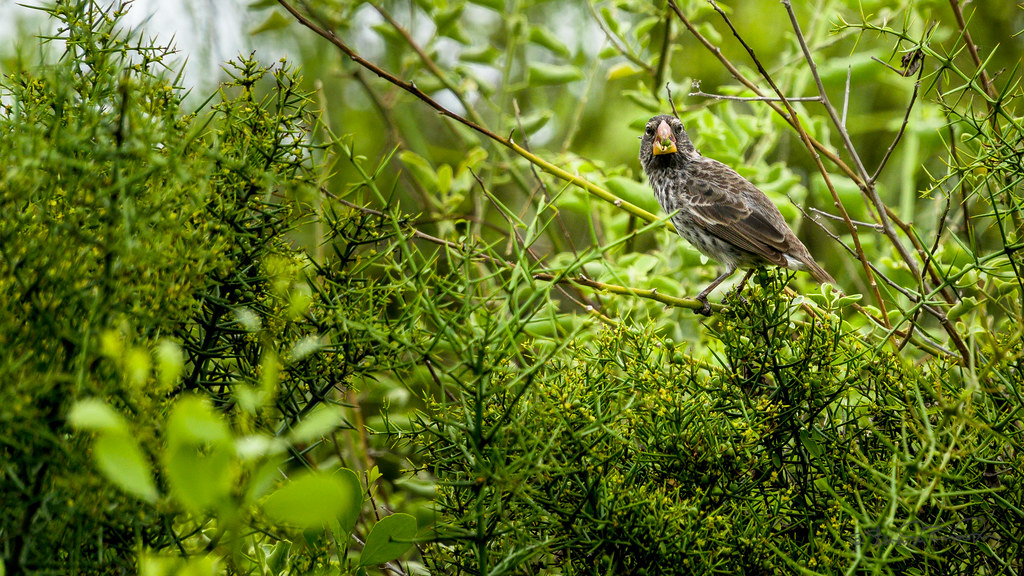 Wet suits were available to rent for $20 for the entire time—worth it although I didn’t go snorkeling until the final day. Went to North Seymour Island for snorkeling. I went in the zodiac but didn’t go into the water; getting a cold so didn’t want to push it. Saw lots of birds. Nice sunset ride back to the boat. Weather moderate—perfect. Overcast but no bugs. Took zodiac to Darwin Island beach for a short hike on the beach where buccaneers used to hang out. Lots of birds and sea lions. Later, those that wanted to snorkel went back near this beach. Lunch and then another snorkel later but in deeper water (30 – 40 feet). (I didn’t do either and Steven did only the first one; water murky). Night was relatively smooth last night. Took 10.5 hr to go from Tower (Genovesa) Island to Isla Plaza (south end). 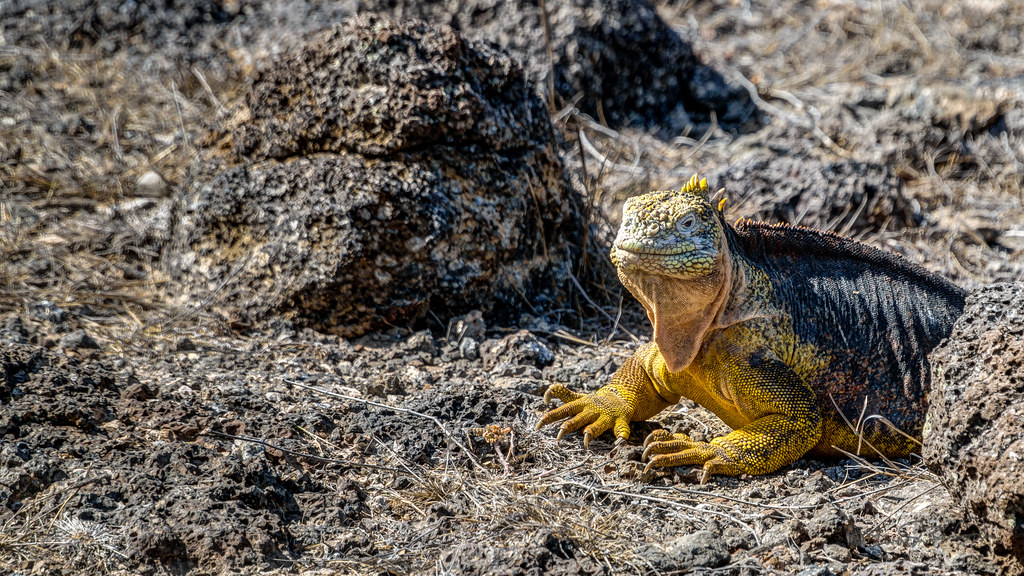 Hiked (saw land iguanas, sea lions with lots of babies). On board, we had a talk about the beginning of the Galapagos Island and how they formed. Also, chef gave a demonstration on how to make ceviche. After lunch we sailed to Santa Fe Island. Afternoon snorkel I did. Turns out to have been best day to snorkel because of clear water. Saw 5 mantra rays, several sea lions, two tortoise, a lots of different fish. I did ok in the water; no problems! Took zodiac to Santa Fe Island for a hike—hawks, iguanas, sea lions/babies. On boat we had a lesson in making a ‘hot’ cocktail. Not great!

After dinner, we celebrated Howard’s 70th birthday with a big cake. Last night rocky but nothing like first night. At 7:00 am we went by Kickers Rock (actually two large rocks in the water). Boat went around the rocks so we could see from all sides. Landed at Isla San Cristobel where the airport is located. Looks like a typical beach town. Had about 1.5 hours to walk around (and buy!). Found the T-shirt I wanted (first one I got was an XS. Steven got the same shirt. I liked it so much that I wanted to find it in a Med. Finally did find it but had to pay $8 more!).