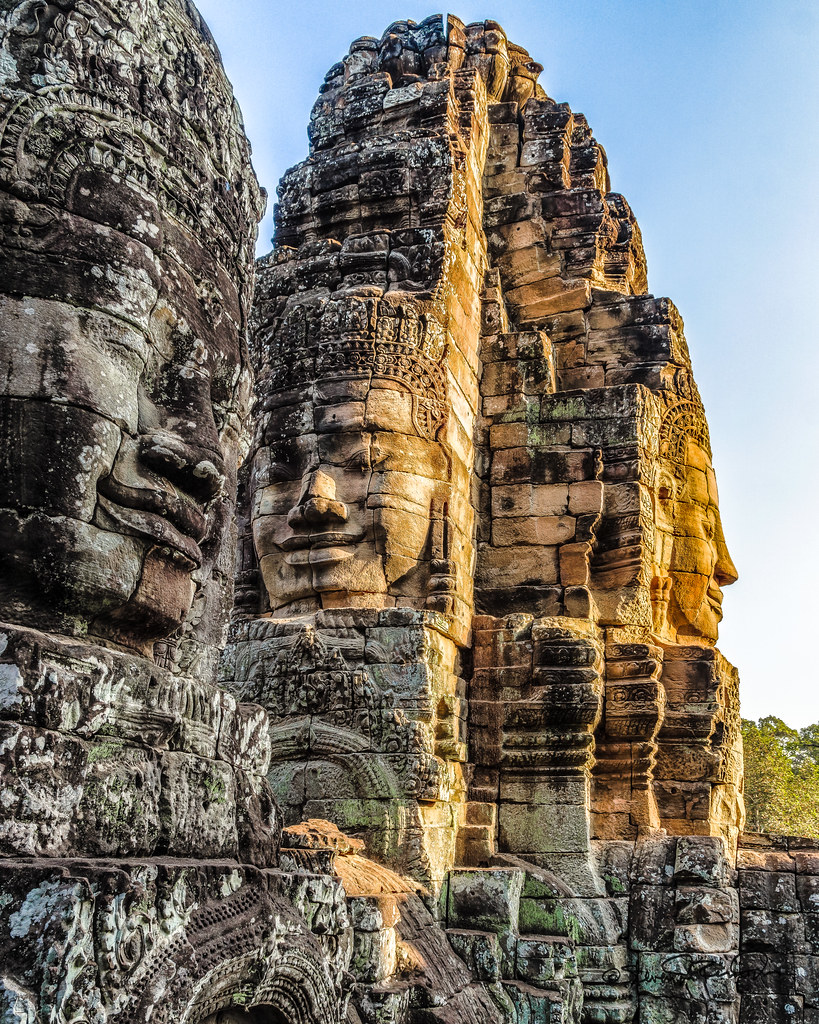 Siem Reap, Cambodia, has colonial and Chinese-style architecture in the Old French Quarter and around the Old Market. Today it has a large number of hotels, resorts, restaurants and businesses because of its proximity to the Angkor City temples, the most popular tourist attraction in Cambodia.

We set off to the floating village on the Tonle Sap Lake, the largest fresh water lake in South East Asia. On the way we took a 20 minute ride on a water buffalo-drawn cart through the village of Tajet with 800 people. The floating village of Mechrey has about 1,200 residents who change location depending on the lake level which varies with the seasons. The village supports all aspects of daily life afloat - stores, schools, gas stations, etc.

We stopped to visit the village mid-wife and her fisherman husband. She has aided in 10 of her grandchildren’s births and over 300 others because there is no hospital in the area or medical care. She is quite the matriarch of the family and a major medical support for the community.

Later we headed out to Angkor Thom, a late 12th century city containing the 12th-century Bayon where there are over 200 smiling faces. This temple structure’s 54 stone towers are embellished with massive grinning heads that symbolize the spirit of one of Cambodia’s most beloved kings, Jayavarman VII. There are five gates to enter Angkor Thom built by J-VII. Before one gate, there is a long bridge with statues of heads (depicting demons and gods) lining both sides of the bridge.

Early next morning we visited Angkor Wat, a masterpiece of Khmer architecture. It's a large pyramid temple, built between 1113 and 1150, surrounded by a great moat 570 feet wide. Built in 1113-1150, we set off for the west gate. We went to level one and two but by 10:30, the line for level three was over 45 min long so we chose not to spend time in a line with the hot sun overhead. Relief stories filled the long hallways. There are numerous temples at AW, including pools, large roots of trees growing around stones.

We took an optional tour to Banteay Srei temples, also known as “the Women’s Temple. The pink stone temple is one hour’s drive (20 miles) from Siem Reap. The drive there through the rural countryside was very interesting in that you saw everyday activity near the homes along the road. Once at the temple, it got crowded quickly (of course, Chinese tourists who love to each get their picture taken in every arch way and block the path for others). This temple was built by Raja Kuru in 967AD who was a teacher and top advisor to the King and therefore smaller than most. But it had the most intricate carvings and is one of the most beautiful and well preserved temples in Cambodia. It is dedicated to Shiva in 967AD and is still in great condition (200 years older than Angkor Wat) due to the pink soapstone which is considered the best quality. Nothing here has been recarved and it has retained the original carvings. Quite astonishing and one of our favorite temples.