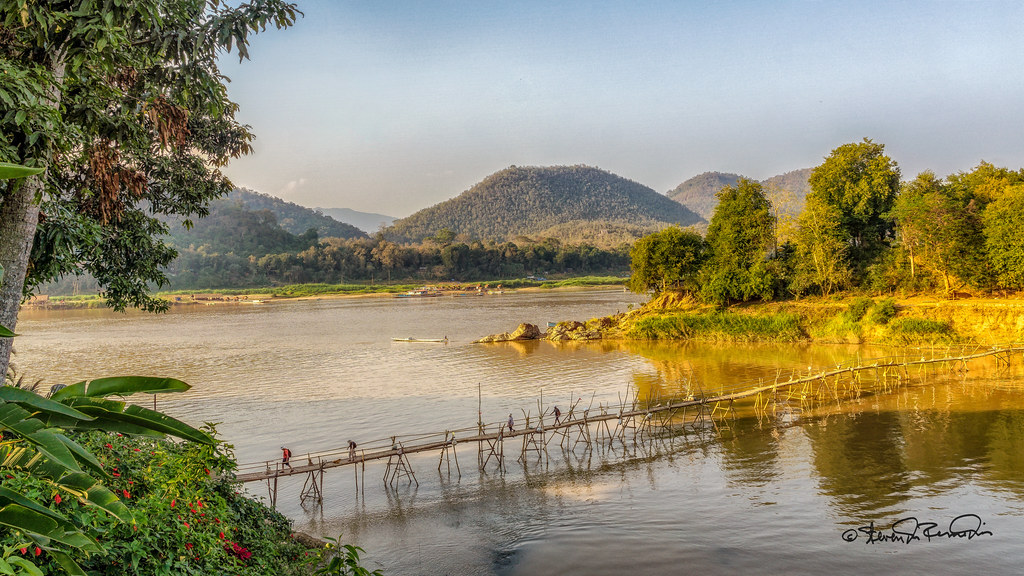 Luang Prabang, Laos, was listed by UNESCO in 1995 for unique and "remarkably" well preserved architectural, religious and cultural heritage, a blend of the rural and urban developments over several centuries, including the French colonial influences during the 19th and 20th centuries.

Our group took Jumbos to main area of town where the large outdoor street market is held. In the middle of the street, we climbed 328 steep uneven steps to Phusi Hill to see the view. At the top is a small temple with a Buddha; the entire area at top is very crowded (mostly Chinese tourists) as people sit up there and wait for the sun to set.

We cruised on our own open-air long/low boat along the Mekong River “mother of all rivers” which supports some 90 million people who produce 54,000 square miles of rice every year. Also home to more species of giant fish than any other river, this majestic waterway is said to produce balls of light along its surface, which the locals attribute to the Phaya Naga, or Mekong Dragons. Stopped at a village where they make river weed chips. Sylvia helped the old lady prepare the weed by pounding, adding tomatoes, garlic and then they dry the weed for at least a month. After it is dried, it is rolled up and eventually sold as a delicacy (had some later and it was delicious).

We continued on the river to Pak Ou Cave and walked up numerous steps to see a cave with with thousands of Buddha statues. Upon entering the cave, each of us got a marigold wrapped in a leaf with a candle. The candle was lit and you said a prayer in the front of the main Buddha.

Back in town we met to go see the oldest temple in this region. It contained a series of temples in a large complex. Spent about one hour walking around before sunset. Most of the temples here had mosaics of glass in their outside walls.

Perhaps the most spiritual activity we experienced was alms-giving to local monks in the early morning hours. We were given a bowl each of sticky rice to be doled out to the orange clad Lao robed monks as they walked by. Problem was that the sticky rice gets stuck and it’s hard to grab a golf ball size amount to put in the monk’s container before the next monk is there for his allotment. We ran out of rice before we ran out of monks – hundreds of monks do this every morning all over town! We then walked a few yards to the temple and gave two young monks fruit in return for a blessing.