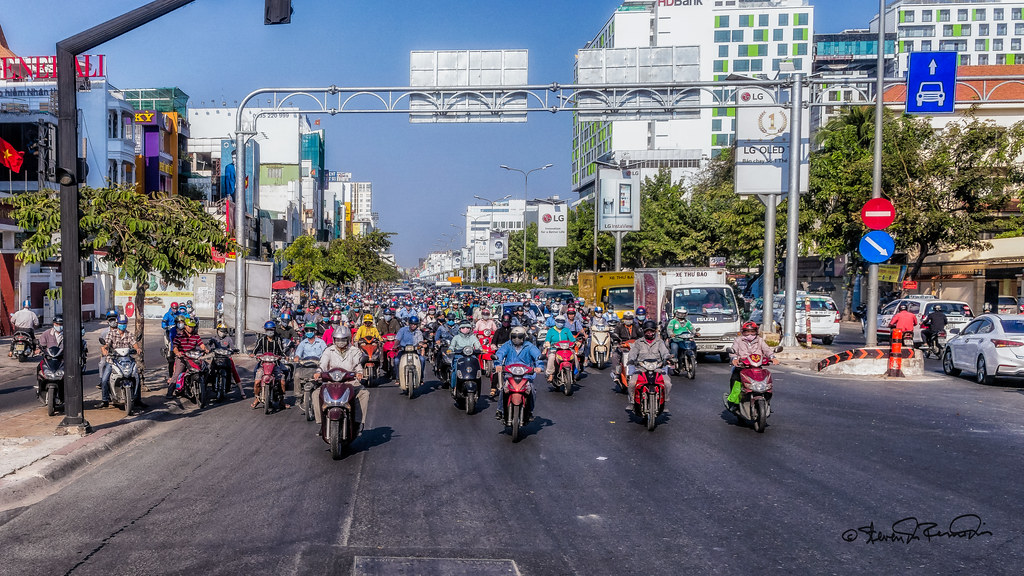 We departed for the Mekong Delta area 50 miles southwest of Saigon on the upper Mekong River. We stopped for coffee and tea at an outdoor café beside the road and checked out the numerous hammocks available to us. Took a Vietnamese wood boat ride to village of Ben Tre across the Mekong river. Walked along a canal to the rowing dock for a sampan boat and then took a leisurely short ride along the canal to visit to a local place where coconut candy (sweet keo dua) is made.

Weather was perfect for our XO Food Tour and we left hotel during rush hour to merge into the chaotic traffic of Saigon on the back of motorbikes. What fun. We had a ride to the first of three food stops (14 dishes total including Pho [fuh!]; BBQ of goat, meat, chicken; Seafood dishes (scallops, clams, and shrimp), a 20 minute ride to walk through the 24 hour Chinese market, a stop at the new (and rich) area of the city. The four of us felt that this night was definitely a highlight and one of the most exciting tours to take. Afterwards, we all went to the hotel’s outdoor terrace for drinks.

We took a tour of Independence Palace and grounds (complete with replicas of the tanks that were on the grounds that fateful day), we went to a nearby neighborhood to see a Hidden Bunker armory that the Viet Cong had in the middle of the city!

We traveled about 2 hours northwest of the city to see the Cu Chi Tunnels in a less crowded area. The tunnels, a 125-mile-long underground maze where thousands of fighters and villagers hid and fought during the Vietnam War, referred to by locals as the “American War.” The South Vietnamese Communists, or Viet Cong, built this vast network of tunnels in and around the district of Cu Chi and worked continually over 25 years to expand the multi-level network.